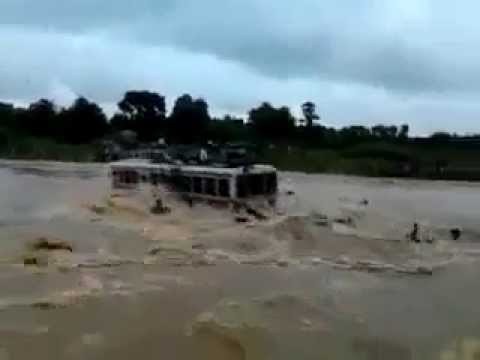 Shocking!! Bus and Passengers Washed Away in West Bengal River 2012

Two people died and at least six were missing after a bus fell into a river in West Bengal's Bankura district Thursday. "So far, we have fished out two bodies," District Magistrate G.A. Ansari told IANS on the phone, adding 45 passengers have been rescued and sent to hospital. A police source said six other bus passengers were still missing after the accident which occurred at Fulkushma, about 160 kms from here. "The bus fell into the river Bhairabanki when it was crossing a low bridge in blinding rain," said Police Superintendent Mukesh Kumar. Ansari, Kumar and other senior administrative officers rushed to the accident site aunder Khatra sub-division. Divers were deployed, but rescue work was hampered due to the heavy rains. Chief Minister Mamata Banerjee said the driver seemingly lost control in the rains and the bus slipped into the river. "The local people and the administration personnel did the rescue work. I held a meeting with the disaster management team. A disaster management team was rushed to the spot from Asansol in Burdwan district," she said.