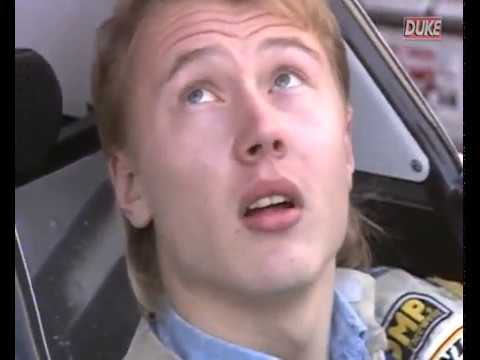 Mika Hakkinen is a Formula One legend -- twice World Champion, 20 times a race winner and regarded by Michael Schumacher as one of his toughest competitors. But just how did the 'Flying Finn' get on the road to becoming a Grand Prix Hero? This fascinating programme is filled with rarely seen footage showing how a shy teenager blossomed into one of the hottest properties in motorsport. Alongside track action, there are extensive interviews with the racer as he progresses towards Formula One glory. Racing from the age of 5, we take up the story in 1987 when the then 19-year-old Hakkinen stepped into a 'slicks and wings' car for the very first time, testing a FF2000 machine at Donington. The short test earned him vital sponsorship and a full season in the Opel Lotus Euroseries in 1988, where Hakkinen marked himself out as the man of the future against such rivals as Heinz-Harald Frentzen, Allan McNish and David Brabham. We enjoy action-packed racing from Zandvoort, Paul Ricard, Sweden's Knutstorp and Jerez as a determined Hakkinen digs deep to secure the title by a single point. The action moves to Formula 3, including racing from Monaco and Silverstone, where the young Finn attracted the attentions of the Grand Prix paddock with a drive from 15th to 5th. This programme also includes rare footage of Hakkinen in his only F3000 drive, testing for Rene Arnoux at Le Mans. We see the initial apprehension replaced by intelligent analysis as the enthused young driver returns to the pits after a taste of real power. However, there would be no F3000 drive. The Lotus Formula One team snapped up Hakkinen for the 1991 Grand Prix season, and we see the Silverstone test which secured him the seat. It is the first time Hakkinen sat in an F1 car, and he immediately impressed Lotus boss Peter Collins, who reveals in an interview his admiration for his new charge. Of course, it is behind the wheel of a McLaren Formula One car that Hakkinen is best remembered, and archive footage from 1993 shows him getting his first taste of the MP4/8 alongside first Michael Andretti and then the great Ayrton Senna. It is a delight to have access to the rarefied atmosphere of a McLaren test in the presence of a legend, and a legend-in-the-making -- especially when they take to the testing track! The film concludes with Hakkinen's installation as McLaren's number 1 driver in 1994, the final piece in the jigsaw which would lead to race wins and championship glory in 1998 and 1999, and secure Hakkinen's place as a Grand Prix Hero. Available to Download - http://bit.ly/SXOSmy and DVD - http://bit.ly/NzuDIy Gilles Villeneuve DVD available here - http://bit.ly/14ZhAd9 We're on INSTAGRAM: http://bit.ly/2evtvsg Like us on FACEBOOK: http://bit.ly/2dKA2eQ Follow us on TWITTER: http://bit.ly/2evt6Gv