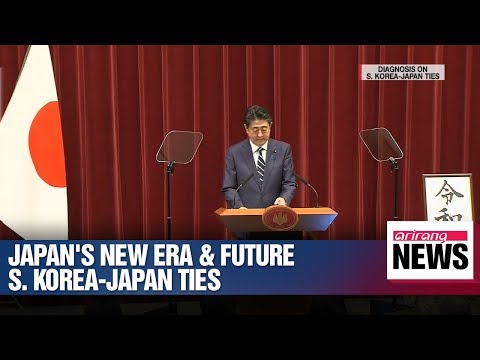 악화일로 한일관계, 새 일왕 즉위가 미칠 영향은? Japan has unveiled the name of its new imperial era this week... ahead of the emperor's abdication set for May. While interpretations on the new name, 'Reiwa' vary,... much attention is being drawn to the incoming emperor Naruhito and his foreign policy directions. Today we discuss in-depth on Japan's opening of a new era and the possible effects on Korea-Japan relations. For that, Chairman Kim Sang-woo of East Asia Cultural Project now joins us in the studio. Thank you for coming in today. 1. Let's start off by diagnosing the current South Korea-Japan relations. It's no secret that the ties of two neighboring countries have gone sour following a series of diplomatic rows, ranging from compensation issues regarding Japan's wartime forced labor... to the low-altitude flyover by Japan's patrol aircraft. How do you assess current South Korea-Japan relations? 2. To add insult to injury, Japan recently approved elementary school textbooks that renewed false territorial claims on South Korea's eastermost Dokdo island. It's been an annual event for nearly a decade now, but what do you think is Japan's motive behind the false claims every year? 3. The National Assembly's education committee has adopted a resolution today that demands Japan to correct its elementary school textbooks regarding its false Dokdo claims. Could this be a viable solution to this years-old problem? What other ways are there to stop Japan from making such ungrounded claims? 4. The diplomatic friction also seems to be affecting South Korea-Japan economic relations. President Moon Jae-in, during a meeting with foreign investors last week, assured Japanese investors that economic exchanges must be dealt separately from political issues. How do you see the effect of diplomatic troubles on the two nations' economic relations? 5. Moving on to Japan's new imperial era. Japan has unveiled the name of its new imperial era ahead of the emperor's abdication set for next month. The name, 'Reiwa' is now being interpreted in various ways. What's your take on the new name? 6. Much attention is focused on the incoming emperor Naruhito. Could you tell us about his stance on South Korea-Japan relations and do you think the beginning of the Naruhito era could serve as a turning point to the soured Seoul-Tokyo relations? 7. We have an important summit coming up. While preparation is well underway for the summit between President Moon and Trump, the Trump administration is putting emphasis on a trilateral South Korea-U.S.-Japan cooperation in resolving the North Korea nuclear issue. How do you assess the significance of trilateral cooperation in breaking nuclear stalemate? 8. What other options do we have in resolving piled up diplomatic rows between Seoul and Tokyo? Would a South Korea-Japan summit be one way? Or perhaps we should take the matter to the global stage? Arirang News Facebook: http://www.facebook.com/arirangtvnews