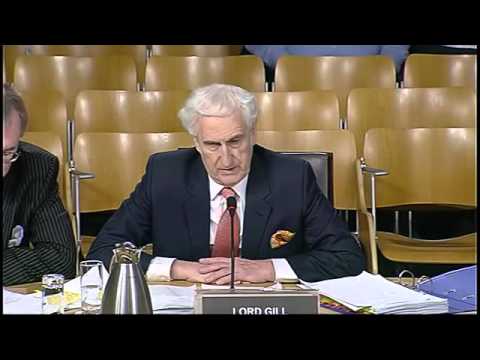 John Wilson MSP (Independent) puts questions to former Lord President & Lord Justice General Brian Gill on proposals to create a register of interests. At times heated exchanges from the former Lord President, who is accompanied by his ex Private Secretary Roddy Flinn. Gill refused two earlier invitations to appear before the Public Petitions Committee in 2013 and was dubbed "Lord No No." Several times during the debate the 73 year old 'retired' Lord Gill called on the panel of MSPs to show faith in the UK judiciary and scrap the petition along with calls for greater transparency of judges interests. You can read more about the petition on the Scottish Parliament's website here: http://www.scottish.parliament.uk/gettinginvolved/petitions/registerofjudicialinterests Further details on judicial interests, investigations of judges connections to big business, banks & other vested legal interests can be found on the Scots law blog: Diary of Injustice - here: http://petercherbi.blogspot.com/search/label/Register%20of%20Interests%20for%20Judges