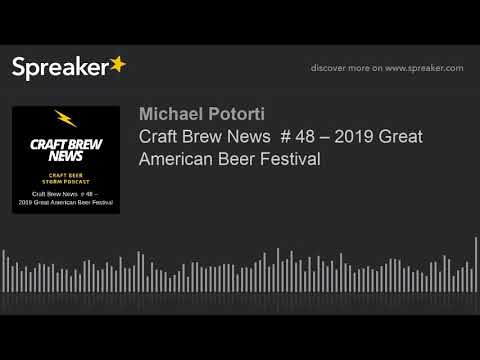 Source: https://www.spreaker.com/user/10822089/cbn-101119-podcast Craft Brew News 10/11/19 (courtesy of Brewbound www.brewbound.com ) Wrapping up the 2019 Great American Beer Festival About 60,000 people attended last week’s Great American Beer Festival in Denver, but the 2019 edition of national trade group the Brewers Association’s (BA) largest consumer-facing event may mark the last in which beer is the only featured alcoholic beverage. Leaders within the not-for-profit trade group told Brewbound that discussions are ongoing about opening up future festivals to other alcoholic beverages beyond beer that craft breweries are making. Could there be a beyond beer pavilion? A section dedicated to hard seltzer? At this point, the organizers say they are keeping an open mind as they try to attract more consumers to the annual event. Although this year’s GABF didn’t sell out completely, three of the four sessions, on Friday night, Saturday afternoon, and Saturday evening, each sold out Seen on the Floor … Although there seemed to be more room on the floor this year, lines still jammed up sections where popular brewers — including Russian River, the Lost Abbey, Avery Brewing, WeldWerks, Rhinegeist Brewery and more — were located. Brooklyn Brewery made a statement with its booth, highlighting its non-alcoholic beer, Special Effects, which will launch in select markets this fall before hitting the company’s 30-state footprint in 2020. Pernod Ricard-owned Jameson Irish Whiskey’s barrel-aged beer garden continued to be a major draw within the festival and a big winner over the weekend. Although the company’s advertisements weren’t as ubiquitous as in 2018, the company again wrapped public transportation with Caskmates ads. Meanwhile, Sierra Nevada founder Ken Grossman kicked off Thursday’s GABF session by showing off the legendary Chico, California-headquartered craft brewery’s first brewhouse. Grossman recently reacquired the brewhouse in a trade with Mad River, and the company is sending the brewhouse on the road, starting with San Francisco Beer Week in February and Homebrew Con in Nashville in June. Grossman told Brewbound that he plans to make some legs of the trip with the brewhouse, which is still operational. Best Booth Goes to … For the second consecutive year, New Belgium put together the festival’s most eye-catching booth. The double-sided stand featured a “Fat Tire” branded ski lodge bar on one side, complete with a bubble hockey game, while the other side featured a more traditional bar along with a photo booth called the “Mini Bar.” The Fort Collins-headquartered craft brewery continued to raise the game within the fest. Sam Calagione Leads Boston Beer’s Annual Breakfast Boston Beer Company founder Jim Koch’s 35-year streak of attending GABF was broken this year. Koch was noticeably absent from Friday’s annual breakfast with members of the media, although he did appear via a pre-recorded video from Munich, where he was selecting hops. In Koch’s stead was Dogfish Head co-founder Sam Calagione, whose company merged with Boston Beer Company earlier this year. Unlike past years, Boston Beer did not announce its big innovation for the coming year. However, the company did unveil a limited-release Samuel Adams-Dogfish Head collaboration beer called CollaBEEration, a continually hopped pilsner brewed with honey from Brooklyn and Zambezi. The beer will only be available starting October 11 at Samuel Adams’ taproom in Boston’s Jamaica Plain neighborhood and at Dogfish Head’s taproom in Milton, Delaware. Boston Beer also announced the return of Utopias, the biennial “extreme beer” that checks in at 28% ABV, and which the company claims is illegal in 15 states. The beer will be released in select markets on October 15 for a suggested retail price of $210. The beer will also be on tap at the Samuel Adams taproom in Cincinnati during an anniversary event on November 15. Calagione also announced the 2020 release of World Wide Stout, which has been aged in Utopias barrels. And the Winner is … Of a possible 321 medals in 2,017 beer style categories during the 33rd annual GABF competition, the BA awarded 318 medals. A total of 283 breweries won medals this year. In the most entered category — Juicy or Hazy IPA — Chicago’s Old Irving Brewing’s Breezer took home the gold. Other gold medal winners from the most entered style categories included, Denver-based Comrade Brewing’s More Dodge Less RAM winning for American-style IPA; Austin-based Elmo Brewing’s Roxanne winning for Fruited American-Style Sour Ale; Indianapolis-based Blind Owl Brewery’s Parliament Drive winning for German-Style Pilsener; and Salinas, California-based Alvarado Street Brewery’s Double Cone winning for Imperial IPA. Craft Beer Storm Website: www.craftbeerstorm.com ** Check out Upcoming Craft Beer Weekends ** Hampton, NH The Victoria Inn Bed & Break