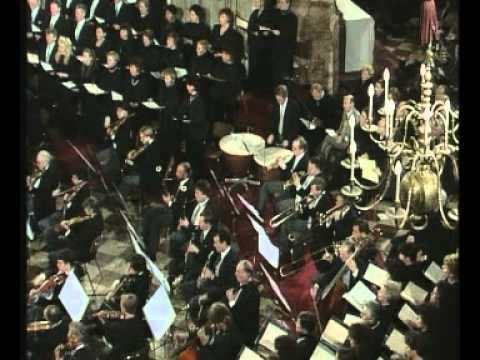 Notice: This video is only for cultural purposes. The Requièm Mass in D minor (K. 626) by Wolfgang Amadeus Mozart was composed in Vienna in 1791 and left unfinished at the composer's death on December 5. A completion dated 1792 by Franz Xaver Süssmayr was delivered to Count Franz von Walsegg, who had anonymously commissioned the piece for a requiem mass to commemorate the February 14 anniversary of his wife's death. The autograph manuscript shows the finished and orchestrated introit in Mozart's hand, as well as detailed drafts of the Kyrie and the sequence Dies Irae as far as the first nine bars of "Lacrimosa", and the offertory. It cannot be shown to what extent Süssmayr may have depended on now lost "scraps of paper" for the remainder; he later claimed the Sanctus and Agnus Dei as his own. Walsegg probably intended to pass the Requiem off as his own composition, as he is known to have done with other works. This plan was frustrated by a public benefit performance for Mozart's widow Constanze. A modern contribution to the mythology is Peter Shaffer's 1979 play Amadeus, in which a mysterious messenger appeared and ordered Mozart to write a requiem mass, giving no explanation for the order. Mozart then came to believe that the piece was meant to be the requiem mass for his own funeral. The Requiem is scored for 2 basset horns in F, 2 bassoons, 2 trumpets in D, 3 trombones (alto, tenor & bass), timpani (2 drums), violins, viola and basso continuo (cello, double bass, and organ). The vocal forces include soprano, contralto, tenor, and bass soloists and an SATB mixed choir. More about: http://en.wikipedia.org/wiki/Mozart_Requiem Conductor: Sir Georg Solti Performer: Vinson Cole, Rene Pape, Arleen Auger, Cecilia Bartoli Vienna State Opera Concert Chorus Vienna Philharmonic Orchestra