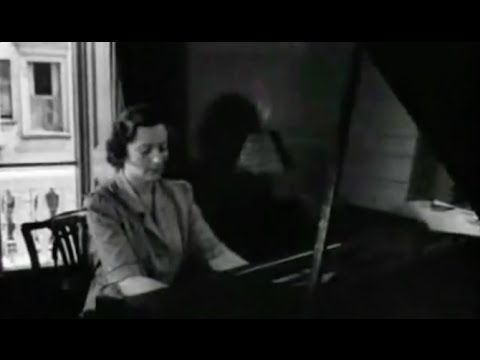 Polish pianist and Holocaust survivor Natalia Karp playing Chopin's Nocturne no. 20 in C-sharp minor, op. posth, in 1949. Karp played this same piece in the Krakow-Plaszow concentration camp to save her life. This video was shot in 1949 at the London unveiling of the plaque to commemorate Chopin's time in London, as well as the centenary of his death. Karp is playing the piano that Chopin played during his London recitals. Here is the wikipedia entry on Natalia Karp: In 1943, after the death of her husband in a bomb raid, Karp was sent to the Kraków-Płaszów concentration camp where she came into contact with Amon Göth. On his birthday, Göth ordered her to play for him and was impressed enough with her performance to spare not only her life but that of her sister as well She chose to play Chopin's Nocturne in C-sharp minor, and would in later years be known for her interpretations of his pieces. Eventually, she and her sister were sent to Auschwitz, but both survived the war. Her grandson, Mark Lowen, a BBC journalist, wrote her story in 2011. Mark Lowen's amazing story can be found online. 'She would often play with a pink handkerchief on the piano, a handkerchief that she had bought shortly after the war as a symbol of the femininity she felt she had lost during her time in the concentration camps.' I have fixed the sync problems in the video. Thanks to KronikaRP and the Warsaw Documentary Film Studio for making this available.