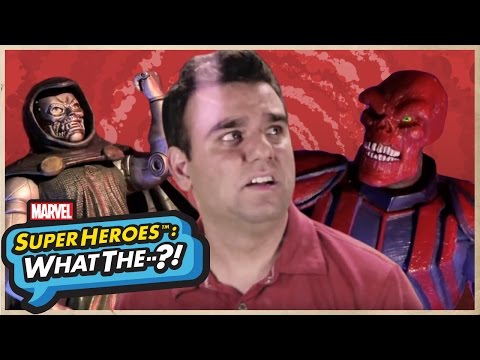 Marvel Super Heroes: What The--?! Unlimited Plus

Have you signed up for Marvel Unlimited Plus yet? If not, you're missing out on great incentives...including a special Ultron-centric goodie the real deal would like to forget! Learn the secret story behind how M.O.D.O.K. and his team ruined Ultron's day while making a mint for Deadpool in the latest episode of Marvel Super Heroes: What The--?! Sign up for Marvel Unlimited Plus: http://marvel.com/comics/unlimited Subscribe to Marvel: http://bit.ly/WeO3YJ Keep up with Marvel on: TWITTER: https://twitter.com/marvel FACEBOOK: http://www.facebook.com/Marvel TUMBLR: http://marvelentertainment.tumblr.com/ INSTAGRAM: http://instagram.com/marvel GOOGLE+: https://plus.google.com/+marvel/ PINTEREST: http://pinterest.com/marvelofficial/ About Marvel Super Heroes: What The--? Witness a Marvel Universe like you have never seen before with a comedic take on your favorite heroes and villains using stop motion animation! Marvel Super Heroes: What The--?! continues Marvel’s tradition of comic book satires as made popular in the Marvel comic book series NOT BRAND ECHH (from the 1960s) and What The--?! (from the 1990s). This time around, it’s not only a new millennium but a new medium, with Marvel exercising its might in the world of stop-motion animation. About Marvel Entertainment Marvel Entertainment, LLC, a wholly-owned subsidiary of The Walt Disney Company, is one of the world's most prominent character-based entertainment companies, built on a proven library of over 10,000 characters featured in a variety of media over seventy years. Marvel utilizes its character franchises in entertainment, licensing and publishing.