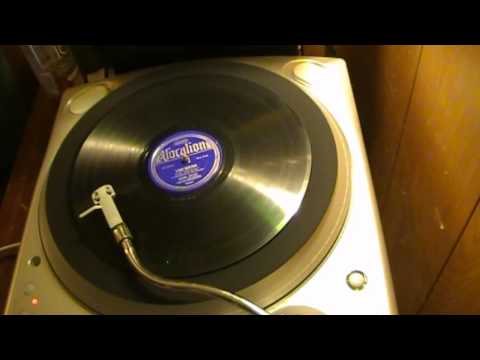 I Got Rhythm - Glenn Miller And His Orchestra (Vocalion)

Recorded on June 9, 1937. "I Got Rhythm" is a song composed by George Gershwin with lyrics by Ira Gershwin and published in 1930, which became a jazz standard. Not only did Ethel Merman introduce "I Got Rhythm" in the Broadway musical, Girl Cray, but Girl Crazy introducedEthel Merman to Broadway. The show opened on October 14, 1930, at the Alvin Theatre and ran for 272 performances. Ginger Rogers was the co-star of the show, but in her debut as a leading lady she lost the limelight to Ethel Merman. Girl Crazy was originally written as a vehicle for Bert Lahr, but when he turned down the part for legal reasons, Willie Howard was brought in to take his place. The orchestra was the Red Nichols Band, including Benny Goodman, Glenn Miller, Jack Teagarden, Jimmy Dorsey, and Gene Krupa. This star-studded orchestra thrilled the audiences with jam sessions during the intermissions. George Gershwin conducted the music at the premier, but after that Earl Busby took over the baton. A short time later, in 1930, Red Nichols and His Five Pennies with vocalist Dick Robertson took "I Got Rhythm" onto the recording charts, rising to number five. In 1931 Ethel Waters' rendition peaked at seventeen, and in 1932 a Louis Armstrong version also rose to seventeen.