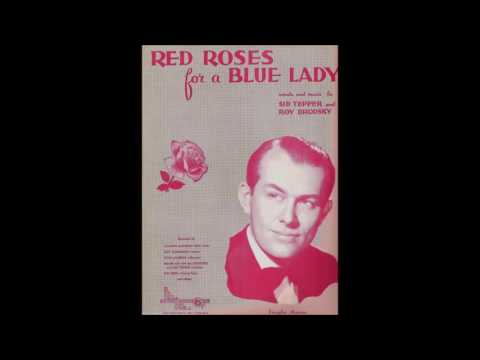 Charted at #3 on Billboard's Records Most Played by Disk Jockeys chart in April 1949. Other versions to chart in 1949: #8 for Guy Lombardo and His Royal Canadians and #21 for John Laurenz. In 1965, "Red Roses" became a hit again when Vic Dana took his remake to #10 on the Billboard Hot 100 (#2 Adult Contemporary), Bert Kaempfert charted at #11 on the Hot 100 with an instrumental version (also #2 AC) and Wayne Newton charted at #23 Hot 100 (#4 AC). A later remake by Eddy Arnold charted at #60 on the Country chart in 1975. Original Billboard review: "Trust in Vaughn to deliver untampered melodic and lyrical interpretations of current songs and at the right tempo. This pairing serves as the proof of this trust. Monroe deals out handsome readings of two ditties which have created some interest. Both are done straight and clean ..." Vocal refrain by Vaughn Monroe and the Moon Men. Recorded December 15, 1948. Written by Sid Tepper and Roy C. Bennett (aka Roy Brodsky). B-side is "The Melancholy Minstrel".